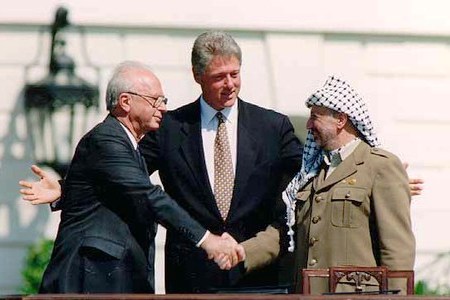 On a visit billed as possibly the last effort his country will make to institute the two-state solution to the Israeli-Palestinian conflict, Norwegian Foreign Minister Espen Barth Eide was in Yerushalayim, where he met with Deputy Foreign Minister Zeev Elkin.

Elkin asked the foreign minister of the country where the 1993 Oslo Accords were signed to discourage the Palestinian Authority from taking unilateral steps that violate the agreement.

“If the Oslo agreement said specifically that the Palestinian Authority will not take unilateral steps to establish an independent state, and after about 20 years it goes to the U.N. and asks for recognition of a Palestinian state, who will ensure that if we sign an agreement they will uphold its conditions?” Elkin said, according to Israel Hayom.

“In the Oslo agreement as well the international community including Norway were guarantors that the agreement would be upheld and today we see that the Palestinians are being allowed to continue to take unilateral steps, that only distances us from a peace agreement. On this issue, the international community must insist that throughout the course of the negotiations, there will be no additional steps by the Palestinian Authority,” he said.