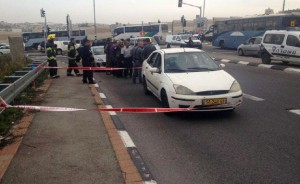 A young Israeli man was stabbed and killed on Monday afternoon in a stabbing attack at a gas station on Route 443 in the West Bank, close to the central town of Modiin.

Two others were hurt in the attack. One of the wounded, an Israeli woman, was lightly hurt when her car was hit by gunfire from security forces. The other, an Israeli woman in her 20s, was lightly injured in the stabbing and evacuated to the Shaare Zedek Medical Center in Jerusalem for treatment.

The Palestinian assailant was shot and killed by Israeli soldiers in the area, according to Channel 2. He was named as Ahmad Daash of the West Bank village of Ketana, near Jerusalem. Daash arrived at the gas station specifically to carry out an attack, according to the TV report.

Magen David Adom paramedics attempted to revive the 18-year-old man who sustained severe abdomenal wounds, but were forced to declare him dead at the scene.

“A young man… was lying on the ground unconscious, with stab wounds to the upper body, on the highway next to the gas station. Nearby, there was a young woman… approximately 20 years old, with stab wounds to her limbs. We gave both medical treatment on the scene,” said MDA medic Yitzchak Aryeh Goldfarb.