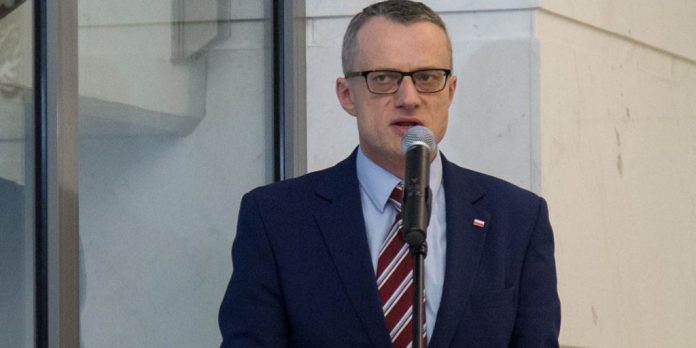 An Israeli man has apologized for spitting at Polish Ambassador to Israel Marek Magierowski.

“I would like to express my apologies,” said Arik Lederman, who was arrested for spitting at the ambassador, in a statement. “My family experienced the Holocaust, and my appeal to the embassy was on the matter of restitution of property.”

Lederman accused a security guard at the Polish embassy for calling him a zhid, a disparaging label for a Jew, causing his eruption. He has requested to apologize to the ambassador in person, adding that he didn’t know the person he spat at was him.

“I hope that with this, the incident will come to an end and will be kept in proportion,” he said.

“We received a report of an incident involving the Polish ambassador in Israel on Tuesday. A suspect approached the ambassador when he was sitting in his car and spat at him,” said the Israeli Police spokesperson’s unit in a statement. “Police forces arrived at the scene and began searching for the suspect, who was arrested in the area. The suspect is a 65-years-old man from Herzliya, he was arrested and will appear before the court in Tel Aviv on Wednesday.”

“I am very worried to hear of a racist attack on @PLinIsrael ambassador @mmagierowski. Poland strongly condemns this xenophobic act of aggression. Violence against diplomats or any other citizens should never be tolerated,” tweeted Polish Prime Minister Mateusz Morawiecki.

“Israel expresses its full sympathy with the Polish ambassador and shock at the attack. Israeli police are currently investigating. We will update our Polish friends. This is a top priority for us, as we are fully committed to diplomats’ safety and security,” tweeted Israeli Foreign Ministry spokesperson Emmanuel Nahshon directly in response to Morawiecki’s post.