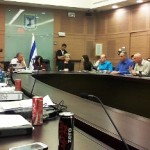 The U.S. Embassy released two statements on Monday outlining U.S. Ambassador to Israel Daniel Shapiro’s meeting with Shaked on Sunday, noting that the two discussed the bill and that the U.S. is concerned about a possible “chilling effect” it may have on Israeli society.

The bill, sponsored by Shaked, requires NGOs that receive more than 50 percent of their funding from foreign governmental entities to detail the funding sources in all their official publications and communications with elected officials. Activists from the NGOs would also be required to wear identifying name tags when working in the Knesset, as lobbyists do.

Critics call the legislation discriminatory because it is mainly left-wing groups that receive money from foreign governments and the European Union. Private funds from overseas are not addressed in the bill.

“Every Israeli organization has the right to oppose any legislation. But it is very surprising to me that foreign governments are sending their long arms into an internal legislation process,” Shaked said.

The NGO bill was approved by Israel’s Ministerial Committee for Legislation and is now up for discussion in the Knesset.