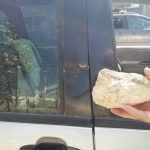 Four Yitzhar residents were detained on the morning of Wednesday, October 14, after they chased a terrorist who threw rocks at a woman driving out of Yitzhar as she exited the gate to the community.

Yitzhar residents stress that there has been a sharp increase in the level of danger because there has never been a security incident at that site, which is on the access road to the community.

The Yitzhar residents are differentiating between the main road, which passes an Arab town, and the access road to Yitzhar, which is off of the main road and leads only to Yitzhar. The woman’s car was damaged and only by a miracle was no one injured.

The terrorists who threw the rocks had apparently come out of an olive grove in which Arabs accompanied by European anarchists were harvesting olives. It is suspected that the incident was very carefully timed.

Yitzhar residents, including the community’s head of security, who were called to the scene began to chase the terrorists. Four residents drove towards Hawara in order to overtake some of the terrorists who had fled in that direction. Near the intersection leading to Hawara, policemen and police detectives stopped the car, even though the Yitzhar residents had not committed any violation of any sort, and detained everyone in it.

A Honenu attorney is providing legal advice to the detainees and seeking clarification of the reason for their detention.

Almost simultaneously with the detention of the Yitzhar residents chasing the terrorists, and very close to the site, army forces apprehended one of the Arabs suspected of throwing rocks.

At the same time, a clash broke out between Yitzhar residents and the European anarchists harvesting olives, then the grove from which the terrorists threw rocks went up in flames.

Honenu said, “Unfortunately the police chose to detain Jews chasing terrorists instead of assisting in the chase. We expect the detainees to be released quickly.”