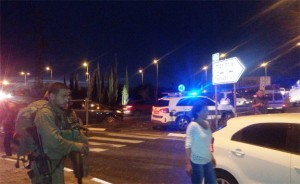 A 26-year-old Israeli was stabbed by a Palestinian terrorist at Ariel Summit along Route 5. His condition is moderate to critical. The terrorist fled the scene.

Earlier, at around 1:30 pm, a female terrorist arrived at a checkpoint near the Meoras Hamachopeilah in order to try to stab Police officers and was immediately neutralized. There were no Israeli injuries in the incident.