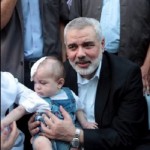 In one of several such known cases, an Israeli hospital on Sunday acknowledged that it had recently provided medical treatment to a family member of Hamas, which is sworn to Israel’s destruction, Israel’s NRG News reported.

The daughter of Gaza Hamas leader, Ismail Haniyeh, was transferred to Israel for several days of medical treatment in Tel Aviv’s Ichilov Hospital, after suffering complications from routine treatment in a Gaza hospital, Israeli officials confirmed.

Haniyeh’s daughter is one of 13 children. Hospital officials declined to offer details of her status or medical condition, saying only that “She is only one of more than a thousand patients from the Gaza Strip and the Palestinian territories, hospitalized each year for treatment here.”

In November, 2013, the hospital treated Haniyeh’s granddaughter, who died of complications, after she was returned to Gaza.

In June, Haniyeh’s mother-in-law was treated in a Jerusalem hospital.

An Israeli official said that, while he could not discuss specific patients from the Gaza Strip, in most cases, requests come through Palestinian doctors, suggesting the Islamist leader may not have been personally involved in the decision to send his daughter for treatment in Israel.

Also in June, Assuta Hospital in Tel Aviv announced that it had treated the wife of Palestinian Authority Chairman, Mahmoud Abbas, at the same time army search crews frantically sought three Israeli teens kidnapped by Hamas in the West Bank. The three were later found murdered in a shallow grave.

During Operation Protective Edge over the summer, dozens of Palestinians wounded in the fighting were taken for treatment in Israel, at Israeli taxpayer expense.