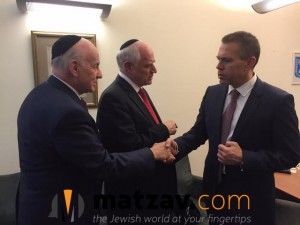 The Israeli government has agreed to step up several security and preservation projects on Har Hazeisim but at the same there are several important projects which will require the support by private funding from Jews worldwide. This was the upshopt of several days of high level meetings by leaders of the International Committee for the Preservation of Har Hazeisim (ICPHH), led by Menachem Lubinsky, co-chairman of the ICPHH. The ICPHH leadership mission met with Gilad Erdan, Minister of Internal Security, Miri Regev, Minister of Culture, Yuli Edelstein, Speaker of the Knesset, Mayor Nir Barkat, First Deputy Mayor Rabbi Yossi Deutsch, Eli Groner, Chief of Staff of the Prime Minister’s Office, Sarit Goldstein, the acting director of the Office of Jerusalem Affairs, and Chaim Shmueli, who is responsible for the police in East Jerusalem. In addition to Mr. Lubinsky, the delegation included Harvey Schwartz and Jeff Daube, leaders of the Israel chapter of ICPHH. Malcolm Hoenlein, the Vice Chairman of the Conference of Presidents of Major American Jewish Organizations and a leading member of the ICPHH Executive Committee participated in some of the high level meetings.

Addressing the security of the 3000-year old international historic cemetery of the Jewish people, Mr. Erdan vowed to “have the necessary forces to protect this holy site.”  The ICPHH officials thanked the Minister for greatly improving the security on Har Hazeisim in the last few months. He and other Israeli officials pledged to move rapidly to construct a wall/gate around the Eastern section (the chelkas of taimanim, Ger, Polen, Afghanistan) of the cemetery which has in the past been the scene of many desecrations. The ICPHH and the Government also agreed to jointly construct an Educational and Visitors Center which will include a shul on the lower section just outside of Har Hazeisim. This is one of the projects that the ICPHH is hoping to mobilize world Jewry to help fund these historic initiatives. The ICPHH is also hoping to restore some 23,000 graves and tombstones destroyed by the Jordanians during their occupation of the cemetery (1948-1967).

“We are extremely gratified by this expanding partnership between the Israeli government, the municipality of Jerusalem and the ICPHH,” said Mr. Lubinsky. He said that the initial successes of the ICPHH since its founding in 2010 have greatly changed the landscape of Har Hazeisim. The installation of 136 cameras and a police station have returned some semblance of security, thanks to the strong support of the government of Prime Minister Benjamin Netanyahu and a majority of the Knesset from all political streams. He also raised the increased maintenance as well as investment in the infra-structure of the huge sprawling holy site.

Mr. Hoenlein said that if Har Hazeisim was an endangered community of 150,000 Jews, “we would have turned over mountains to protect them. Don’t these voiceless Jews deserve the same respect, particularly as far as the shochnei afar is concerned?” He also pointed to the significance of demonstrating sovereignty over a part of Yerushalayim which is the root of “our history and future existence.”

The ICPHH leaders reiterated their expectation that Jews around the world will be part of the historic preservation of one of Judaism’s holiest sites. “Where but on Har Hazeisim can one relive Jewish history from the nevi’im to the leaders of the last generation. Lubinsky pointed out that despite being the oldest Jewish cemetery (perhaps with the notable exception of the Mearas Hamachpeilah), there are still 400 burials a year as Jews seek to be buried in a place where “techiyas hameisim will take place.