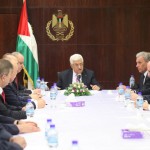 Israeli government officials have been meeting during the past 10 days to discuss the possibility and prevention of a Palestinian Authority (PA) collapse, Haaretz reported on Tuesday.

“We must prevent the Palestinian Authority from collapsing if possible, but at the same time, we must prepare in case it happens,” the newspaper reported Prime Minister Benjamin Netanyahu as telling the Israeli security cabinet in a closed-door meeting.

Israel’s defense establishment gave the government oral and written opinions warning of a possible collapse, according to a senior Israeli official. A collapse of the PA government in the West Bank would create a strain on Israel, said the official, because the Jewish state would need to take over security and civilian affairs in PA-controlled areas.

Netanyahu has previously said he does not want the PA to collapse and wishes to take steps to prevent that scenario. A PA collapse may also pave the way for increased influence by the Gaza-ruling Hamas terror group in the West Bank.