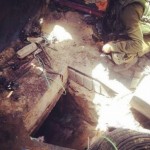 “We have survived rocket attacks for 14 years, and, while disturbing and frightening, we have somehow adapted,” a Kibbutz Alumim resident told The Algemeiner on Sunday.

“…each time there is an alarm we freak out, but act, running to safety and praying,” said Esther Marcus, 49, from her rocket-proof shelter at her communal home, facing the Islamist coastal enclave.

However, on the prospect of tunnels being dug beneath their feet, her laconic mood changed to one of concern.

“The threat of a tunnel being under our doorsteps has taken that fear to a new level,” she admitted.

“How do I act now? How do we protect ourselves?” she wrote.

Despite local reports that alluded to major moves out of Gaza territory, the IDF Spokesman was far cagier when speaking with The Algemeiner.

The IDF, according to Ynet News, pulled out “the majority of its ground forces back to staging areas outside Gaza on Sunday.”

However, the army, for its part, only allowed that, “At the moment, (IDF) forces are moving in order to fulfill ongoing missions to defend Israel, and reaching goals the army set for itself,” a spokesman said, in a telephone interview.

Marcus, a mother of four, made Aliya (immigrated to Israel) from London in 1984 and has been living in her rural community since 1991. She is a married to another immigrant.

But, now, with the diabolical possibility of terror tunnels from below opening up, literally, beneath kindergartens, “now I need to come up with a story to help them cope with tunnels!!! that’s a challenge!”

In the four weeks since the beginning of Operation Protective Edge, IDF forces have uncovered dozens of such well-constructed and equipped tunnels opening into kibbutz areas, near children’s playgrounds, dining halls, and fields.

But, despite the emerging mortal threat, she stressed that “no, no thoughts on moving.”

“Like I said,” she noted, “…call it stupid? (But) we actually live in a vibrant, healthy, supportive community.”

“No one is considering leaving,” she concluded.

A number of soldiers have died and others have been wounded in firefights with Hamas terrorists attempting to infiltrate Israeli villages through the tunnels, and there have been at least two abduction attempts against soldiers, including that of  Givati Brigade officer Hadar Goldin on Friday.

Goldin was laid to rest at his home in Kfar Saba on Sunday afternoon.

The army said that 64 soldiers and officers had been killed since the start of fighting, and some 140 wounded. Palestinian sources say 1,600 have been killed in Israeli retaliation strikes, including hundreds of minors. However, casualty claims on the Palestinian side are provided by Hamas-backed and supporting groups, and none specify who are militants and who are non-combatants, according to Israeli officials and foreign media.

Eshie, a veteran member of Kibbutz Nahal Oz, told Channel 2 News that “a great many of the members have stayed here, and I’m hearing from most of them that they have major concerns about the tunnels’ threat.”

“There’s a sense of uncertainty and anxiety,” he noted. “This causes people (who temporarily sought refuge elsewhere) to think twice before packing their bags to return to the kibbutz.”

Eshie feels that, even after any pullout, the IDF will need to bulk up its forces, in order to provide residents with a sense of security.

“We rely on the IDF, and hope they will know how to redeploy in order not to make the same mistakes as in the past,” he said.

Meanwhile, Palestinian terrorists in Gaza fired salvo after salvo of rocket and mortar shells at Alumim and surrounding communities throughout the interview with Marcus.

“…and yet somehow we go on. Call it human nature, call it a Jewish instinct, call it stupidity, call it SURVIVAL,” she emphasized.

“We just do what we can and admire the soldiers and families of soldiers, and, at the end of the day we believe in the big man upstairs … may it all be His will,” she concluded, hopefully.

Breaking, unconfirmed reports indicate that at least one person sustained serious wounds from a mortar strike at Sdot Negev and at Mifalsim on Sunday afternoon.

There were no immediate reports, however of injury or damage in those attacks.

The IDF reported that Iron Dome batteries near both Tel Aviv and Beersheba downed at least four projectiles aimed to hit within Israel’s commercial and cultural center, home to nearly a third of its nearly eight million residents.