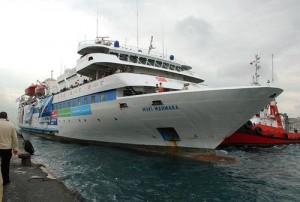 Earlier on Tuesday, an NGO called “Boycott Divestment and Sanctions Against Israel in Africa” said, “South Africa’s Directorate of the Priority Crimes Investigation Unit (DPCIU) has issued warrants of arrest against four Israeli commanders from the Israeli Navy and Israel Defense Forces,” the Jerusalem Post reported.

Israeli Foreign Ministry spokesman Emmanuel Nahshon said that “there is a coalition committed to an anti-Israel agenda,” whose members “cynically abuse [South Africa’s] justice system in order to advance a hostile agenda against Israel.”

Nahshon added that he believes the South African government will not support this move.

“We know that the highest authorities in South Africa will not lend their backing to this ugly attempt,” he said.

The South African arrest warrants come as a judge issued similar warrants in Spain for the arrest of Israeli Prime Minister Benjamin Netanyahu and other senior Israeli officials on Tuesday, also over the flotilla incident. In May 2010, Israeli commandos boarded the Mavi Marmara, which was trying to break the naval blockade of the Gaza Strip. After militants attacked the Israeli forces, nine Turkish citizens were killed in clashes, leading to the deterioration of Israel-Turkey relations.