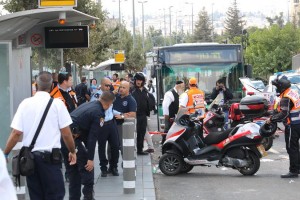 As Israel endures another cycle of terrorist activity, stricter measures have been called for in order to prevent the wave of violence, particularly in Yerushalayim’s Old City.

Accordingly, the government has renewed its punitive measures of house demolition of homes belonging to terrorist offenders. Nevertheless, commentators have raised questions about the policy’s effectiveness as a deterrence to further attacks.

In an interview with TPS, Professor Esteban F. Klor from the Department of Economics at the Hebrew University of Jerusalem, claimed that demolitions only have a limited impact. Klor, who co-authored a research paper in May 2014 on the impact of house demolition in preventing suicide attacks, told TPS that while destroying houses certainly decreases the immediate willingness of individuals to commit attacks, such effects are not long lasting.

According to Klor, “the effect of decreasing the likelihood completely disappears within two months. In other words there is an immediate effect but the magnitude is very small. So if you ask me if this is effective and is going to solve the problem then I would say no.”

He added that the government measures are used to “send messages to the Israeli public that the people are being punished rather than to the Palestinian public.”

Itzik Shadni, Lieutenant Colonel (Res.) of the Israel Defense Forces, however does not completely agree with the professor. He told TPS that the policy is indeed designed to send a message to potential Palestinian terrorists but cannot yield results without measures being taken in parallel with the home demolition policy.

“You have to take a variation of actions in order to destroy this terror. One of them is destroying houses. Other measures should be that if a terrorist came from a certain village then the village should be on lockdown for one month. They can eat, drink and go about their daily lives as usual and in peace. But they should not be able to work,” Shadni told TPS.

He added that the way the policy of house demolition is currently being implemented is doomed to fail, given the intervals between the attacks and the demolition.

“Yesterday they destroyed two buildings in Jerusalem for something that happened about a year and a half ago.” Shadni said that “after one hour the houses should be gone. No more than one hour. Do it a few times I guarantee that the terror will decrease.”

The IDF announced last Tuesday, October 6 that it had demolished the homes of two Palestinian men from East Jerusalem for terror attacks committed in 2014. The homes belonged to Ghassan Abu Jamal and Muhammed Naif El-Jaabis. On November 17 in 2014, El-Jaabis and his brother murdered four Jewish men and a Druze police officer with a meat cleaver and a gun. Jamal plowed an earthmover into a bus on August 4, the same year.