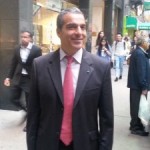 “Anti-Semitism is not a Jewish problem. It concerns Jews, but it’s a global and universal problem.” So says Ambassador Gideon Behar, the Israeli diplomat who is spearheading his country’s efforts to combat the revival of anti-Semitism across the world.

Behar, the director of the Department for Combating Antisemitism at the Israeli Foreign Ministry, has been in the job since 2011. Prior to that, his work centered on the Middle East and Africa. Having served in the Foreign Ministry’s department dealing with Jordan, Syria and Lebanon, he rose to the rank of ambassador, appointed in 2006 as the head of Israel’s diplomatic mission in the west African state of Senegal. After five years in Africa, he returned to Israel to concentrate on the fight against anti-Semitism – which means that these days, he spends much of his time focused on events in Europe.

In a lengthy interview with The Algemeiner in New York, where he discussed his work with Jewish advocacy groups, academics and others, Behar was keen to talk about the impact of the recent Gaza war on Jewish communities abroad. “When we looked at what was happening in Europe, we noticed that in places like Poland, Bulgaria and Romania, there was no rise in anti-Semitism,” he said. “Those countries that were once communist didn’t experience the levels of anti-Semitism that we saw in western Europe.” While eastern Europe is certainly not free of Jew-hatred – at several points in the conversation, Behar talked with concern about Jobbik, the neo-Nazi Hungarian party that has grown markedly in popularity – he emphasized that in western Europe, there has been an alarming crossover between anti-Israel rhetoric and demonstrations, and violent attacks on Jews, often carried out by Muslims.

There are, Behar said, four principal sources of anti-Semitism today: the Arab and Islamic world, the neo-fascist right, the radical left and online – during Israel’s operation in Gaza, social media platforms and website comment sections bristled with anti-Semitic invective, often from anonymous contributors. Anywhere where there are acute social, economic or political problems, Behar argued, is fertile soil for anti-Semitism. That also applies to those countries, especially in Europe, which Behar described as undergoing an “identity crisis.” The spectacle of Hungarian fascists unveiling a statue of the country’s pro-Nazi wartime ruler, Admiral Miklos Horthy, as well as the images from Greece of supporters of the neo-Nazi Golden Dawn party offering Hitler salutes, suggests to Behar that Europe has not quite gotten over its deadly recent past.

How, though, can a phenomenon that surfaces from Venezuela to Turkey, and that has rightly been described by scholars as “the longest hatred,” be countered effectively? Behar is modest about what is possible and he doesn’t claim that anti-Semitism will eventually disappear. But its toxic influence can, nonetheless, be ameliorated – and education, Behar believes, is key.

Teaching students about the Holocaust can help, Behar insists. He spoke with pride about a project to teach schoolchildren in Cyprus the history of the Holocaust, aided by Yad Vashem, the Holocaust remembrance authority in Jerusalem. The children were encouraged to participate in an essay competition, with the authors of the best entries rewarded with a trip to Israel.

“We should make the Holocaust relevant to our time,” Behar said. “It’s not only a historical event. The world today is not free of atrocities, genocide and war – look at what is happening in Syria and Iraq with Islamic State. The potential for mass atrocities is still there, which is why the lessons of the Holocaust must remain in our minds.”

In Behar’s view, the strategy of the Islamic State terrorist group echoes that of the Nazis during the previous century. “You start with the minorities in order to control the majority,” Behar said. “That’s what the Nazis did to the Jews, and this is what the Islamic State is doing today – they are killing minorities like Christians, Yezidis and Kurds in order to dominate the majority.”

While the universal message of the Holocaust is not in doubt, is Holocaust education an effective tool for countering anti-Semitism today? Behar acknowledges that alongside outright Holocaust denial, there is a great deal of what he calls “Holocaust distortion.” The aim, he says, should be to protect the Holocaust and its legacy from political manipulation. “Holocaust education shouldn’t be an instrument to promote a certain ideology or agenda,” Behar said. “It’s part of the heritage of humanity. We were the victims, but the crime was against humanity as a whole.”

In that regard, Iran, which has long promoted both Holocaust denial and distortion, is a main area of concern for Behar. “Iran is the only state which promotes anti-Semitism as an official policy.” Asked whether the same might be said of Turkey, whose recently elected president Recep Tayip Erodgan infamously depicted Israel as “worse than Hitler,” Behar replied that while he condemned the comments of the Turkish leader, Turkey as a state has not used anti-Semitism in the manner of Iran. Critically, Behar said, Turkey has not sponsored terrorist attacks on diaspora Jewish communities, as Iran did when its agents bombed the AMIA Jewish community center in Buenos Aires in 1994.

What of the future? Behar was reluctant to come across as a prophet of doom, but duty requires him to tell it as he sees it. “It’s unthinkable that 70 years after Hitler, Jews can’t walk safely in the streets,” he said. American Jews, he added, have an important role to play in boosting the morale of Jewish communities in Europe, Latin America and other regions where anti-Semitism is on the rise. “Show solidarity and put more resources into the fight,” he urged.