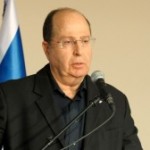 Israel’s defense minister advised the country’s citizens on Thursday to be constantly prepared for potential stabbing attacks, amid the current wave of violence sweeping the Jewish state.

Defense Minister Moshe Ya’alon told National Public Radio (NPR) that Israelis should be aware that a stabbing attack could take place “in a minute,” and they should learn about how to respond in the event of an attack. He noted that the assailants are often killed by security forces in such incidents, and asserted that Israel’s security situation today is relatively calm compared to earlier periods of widespread suicide-bombings.

Yaalon said the recent surge in Palestinian terrorism can be classified as both “political and religious violence,” and that Islam has “become a precious, strategic asset for those trying to acheive political gains.”

He also noted that Palestinians often seek to portray their plight as being more dire than it actually is.

Israelis and Arabs live together with “marginal problems,” he said.

Ya’alon visited Washington, DC, this week to discuss enhancing security cooperation between the US and Israel, according to NPR.