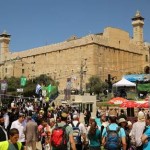 Israeli Defense Minister Moshe Ya’alon is seeking to build a security fence to separate Chevron from the southern Israeli city of Kiryat Gat amid the wave of Palestinian terror plaguing Israel.

“We are aware of the issue of the fence, and now with the budgetary approval for the massive fence we plan to build one similar to the border fence with Egypt—it will take some time but it will happen,” Ya’alon said, the Jerusalem Post reported.

A number of terrorists have infiltrated Israel’s Lakhish Regional Council, which includes Kiryat Gat, in recent weeks. On Nov. 20, a terrorist stabbed and wounded four Israelis, including a 13-year-old girl, in Kiryat Gat. Two other women, ages 56 and 44, as well as a 51-year-old man were wounded in the attack.