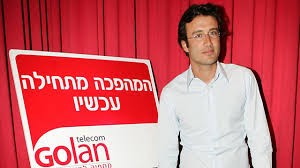 The announcement that Israeli telecommunications company Golan Telecom will be sold to its large competitor Cellcom for $1.17 billion has raised great concerns amongst Israeli customers, who fear that the move will result in a rise in prices and will hinder the achievements of the Israeli cellular market reform.

Though Golan Telecom stressed to its 900,000 customers that their monthly payments will remain as is, the company has been under harsh criticism from Israeli customers and politicians.

A short while after the announcement, the company’s Facebook page was filled with hundreds of furious comments. “This is a black day for Israeli telecommunications and for the competitiveness in the market, and we will all pay the price,” read one of the comments. “We are going back to being suckers. The Frenchman has fooled us all,” read another.

Golan Telecom’s founder and CEO, Michael Golan, addressed some of the criticism in an interview for Channel 2 News this evening. “We will continue to be the most competitive cellphone operator,” he claimed. “For five years we have fought for the Israeli customer. A billion shekels in savings have returned to the Israeli public. There is no turning back.”

Golan claimed that he had no choice but to sell his company. “The company is in debt to other owners,” he explained. “We reached a solution that balances between Golan Telecom, which will provide services to all of the customers, and Cellcom, which will provide engineering solutions. This deal is the best solution… the achievements of the cellular revolution will continue.”