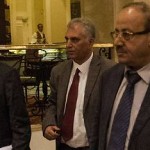 An Israeli civil rights group has filed a complaint in the International Criminal Court (ICC) in the Hague against Hamas leader Khaled Mashaal over the July-August murders of 38 Gazan civilians. The motion by the Shurat Hadin Israel Law Center to bring Mashaal to the ICC was made possible by the fact that he is a citizen of Jordan, one of the ICC member states, and represents the first time that a Palestinian terrorist would be brought to the court on the basis of his Jordanian citizenship.
The complaint alleges that Hamas executed 20 Gazan civilians on July 28 for engaging in anti-Hamas protests, and publicly executed at least 18 civilians on August 22 for “collaboration” with Israel. The complaint further states that Mashaal “had knowledge of the executions, oversees Hamas’s governance of Gaza, and actively encourages and supports the executions.”
As a Jordanian citizen, the Hamas leader is subject to prosecution by the ICC because court is “empowered to exercise its jurisdiction over all acts committed by the citizen of a member, wherever those acts are committed,” explained attorney Nitsana Darshan-Leitner, the chairperson of Shurat Hadin.
In video footage broadcast around the world, Hamas spokesmen testified to the killings of at least 38 civilians in Gaza since the outbreak of this summer’s war with Israel. One of the videos shows Hamas executioners publicly announcing the verdict against some of the condemned civilians, who appear kneeling with cloth bags over their heads in a Gaza mosque. The executions brought widespread condemnation of Hamas from a number of human rights groups.
The Israeli legal group filed the complaint partly as a response to statements made last week by ICC Chief Prosecutor Fatou Bensouda, who said that the court has not “avoided opening an investigation into alleged war crimes in Gaza due to political pressure” and has only failed to do so due to a lack of jurisdiction. According to ICC protocols, either the claimant or defendant in a case must belong to an ICC member state, a status that neither Israel nor Gaza holds. By trying Mashaal as a Jordanian, the Israeli group hopes to force the court to convene on the case, as Bensouda indicated it would be willing to do.
Darshan-Leitner told Tazpit News Agency that if the case against Mashaal succeeds in going to court, the results would be significant for Israel. The Hamas leader would be arrested and put on trial, and as the attorney pointed out, “the punishment for war crimes is imprisonment for life. It’s a life sentence without parole.” She also noted that a successful trial would undermine the legitimacy of Hamas, who would be “recognized as committing war crimes against its own people.”
Asked about the prospects of the case going to trial, Darshan-Leitner said that she intends to “put public pressure on the court to deal with this issue.” She noted that the court has an incentive to take the case in order to avoid appearing hypocritical, since the chief ICC prosecutor herself wrote that the court is willing to deal with allegations against Hamas.
“Quite frankly,” she said, “I don’t see a way out for the court from dealing with this case. For the first time they have the jurisdiction to deal with Hamas war crimes in Gaza.”