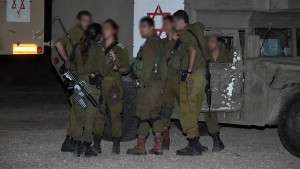 A 23-year-old Israeli Arab crossed the border into Syria using a paraglider on Saturday in order to join one of the terror organizations fighting in the country, it was cleared for publication on Sunday morning.

The IDF made no attempts to stop the Jaljulia resident in flight, and he was picked up by someone on the Syrian side after landing.

Both Army Intelligence and the Shin Bet were now working to find the man, said IDF Spokesman Brig.-Gen. Moti Almoz.

The IDF spokesman said the army did not know which organization the young man was trying to join.

The area the man was flying to, in the southern Syrian Golan Heights, is controlled by al-Qaeda breakaway group the Yarmouk Martyrs Brigade, which pledged allegiance to the Islamic State and has even fought against al-Nusra Front.

“We don’t know if someone was waiting for him on the other side, and we are working under the assumption that anyone who glides against the wind’s direction has planned to do so,” Almoz said. “We didn’t see where he took off from, but paragliders usually take off from Mevo Hama.”

If the IDF and Shin Bet investigation does find that the man intentionally crossed into Syria, Israel will decide how to act, Almoz said, “but on the military front, the incident is almost at an end.”

After IDF lookouts identified a paraglider making its way from Israeli airspace into Syria, large IDF forces were deployed to the Golan Heights and started searching the border area for the man.

The army has been using drones, aircraft and flares to search for the man from the air, as well as on the ground, and has ruled out the possibility the man was a soldier crossing the border.