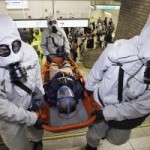 An Israeli intelligence researcher says a successful nerve gas attack perpetrated by a Japanese doomsday cult, which killed dozens and wounded over a 1,000 others could be a working template for ISIS, and like-minded terrorists against the United States or Europe, Israel Defense wrote on Sunday.

Basing his thesis on the triple release of sarin nerve gas on the Tokyo subway system, carried out by five members of the Aum Shinrikyo cult in 1995, Ronen Solomon noted recent threats by ISIS to carry out similar strikes deep within the New York and Paris subways.

Solomon is a widely quoted intelligence analyst, and regularly appears in a number of Israeli and international publications, focusing on the nexus between information-gathering, terrorism, and the mideast.

“The emerging concern is that ISIS activists holding western nationalities will be able to lay their hands on unconventional weapons (chemicals and biological toxins) from Syrian stockpiles and possibly smuggle them into Europe in order to carry out attacks in subways,” Solomon said.

Such an attack was “imminent,” according to Iraqi Prime Minister Haider al-Abadi, speaking with reporters last Thursday, and who added that such plans had not yet been thwarted by his intelligence apparatus, but that US colleagues had been alerted to the dire threat.
“We’ve seen the reports of Prime Minister Abadi’s comments,” U.S. National Security Council Spokeswoman Caitlin Hayden told reporters. “We have not confirmed such a plot, and would have to review any information from our Iraqi partners before making further determinations. We take any threat seriously and always work to corroborate information we receive from our partners.”

Abadi’s remarks were apparently based in information revealed by captured ISIS terrorists.

In the region, Israeli intelligence sources aver that Syria is still hiding stockpiles of sarin gas, this despite putative disarmament accords, to hand over the world’s largest stockpiles of such weapons to western countries for neutralization and destruction.

Israel defense officials told Reuters last week that ISIS fighters are trying to get their hands on those weapons of mass destruction, including “combat warheads, air-to-ground bombs and anti-tank missiles containing toxic gases such as sarin,” Solomon said, quoting Reuters.

In the Tokyo attack, “12 infusion bags containing approximately 300-500 cc of sarin each were hidden in lunch boxes and drink containers. At the designated time, the terrorists punctured the bags with a sharp tool and the sarin began spreading in the train cars and stations. 16 stations were contaminated, causing the deaths of 12 and 5,500 casualties with various degrees of injury who were evacuated to 50 different hospitals throughout Tokyo.”