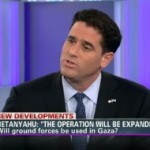 Ron Dermer, Israel’s ambassador to the United States, said his country’s army should be given the Nobel Peace Prize for how it has fought in Gaza.

The man is right on.

Dermer was speaking at the Christians United for Israel Summit in Washington, D.C. today when he criticized the Hamas tactic of using its people as human shields.

“I especially will not tolerate criticism of my country at a time when Israeli soldiers are dying so that innocent Palestinians can live,” he said.

This morning, Secretary of State John Kerry and U.N. Secretary General Ban Ki-Moon will talk with Israeli Prime Minister Bibi Netanyahu in the hopes of brokering a ceasefire. The death toll has risen to more than 29 Israelis dead.