A unique, if somewhat inappropriate, costume made for seven-year-old twins has sparked an Iranian conspiracy theory. An article written by Dr. Kevin Barrett and published today on the state-run Iranian Press TV website, claims that this was expression of Israeli joy regarding the successes of the September 11th attacks.

The article, titled “Israel celebrates successful 9/11 operation on Purim holiday,” stressed that the costume, which depicts the two al-Qaeda hijacked planes as they crashed into the World Trade Center in New York; proved the success of “Zionist scheme.” 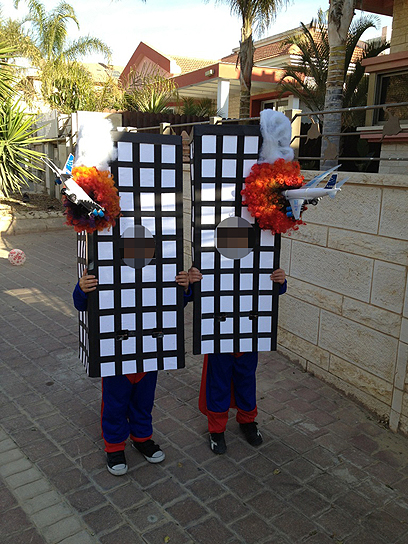 The author compared Purim, which he called “a strange holiday,” to the September 11, 2001 attacks: “Purim exalts and commemorates an ancient operation very much like 9/11. It glorifies the deceptions of Esther, who concealed her Jewish identity to seduce the King of Persia, then slyly tricked him into slaughtering 75,000 people deemed ‘enemies of the Jews,'” wrote Barrett.

Barrett, a lecturer at the University of Wisconsin and a radioman, further compared, writing: “In other words, Purim celebrates Jews lying, secretly penetrating the highest levels of government, and manipulating the leaders of an empire into mass-murdering perceived ‘enemies of the Jewish people.'”

He added that if Israeli is successful in its scheme to cause the US to attack Iran, or cause the outbreak of WWIII, modern Queen Esthers will not only cause the death of millions, but rather even hundreds of millions will lose their lives in the war.

Barrett, who is no newcomer to anti-Israeli article writing, also said that, “The Israeli schoolchildren dressed up as the burning Twin Towers are not the first Zionists to wildly celebrate Israel’s biggest-ever attack on America.

“That honor belongs to the ‘dancing Israelis,’ five Mossad spies who set up their cameras in Liberty State Park, across the harbor from the World Trade Center, early in the morning of September 11, 2001, and pointed those cameras at the as-yet-undamaged Twin Towers.” He also noted that this footage has not yet been publicized.

He continued with the conspiracy theory, saying that the Israelis rejoiced when the planes hit the towers. “They began leaping, cavorting, and high-fiving each other. As the Towers burned, the ‘dancing Israelis’ took pictures of each other holding up burning cigarette lighters in front of the burning Towers.

“And when the Towers were blasted to powder in explosive controlled demolitions, the ‘dancing Israelis’ went crazy with joy. Their plan had succeeded,” he said.

The Iranian talkbackers bought the bait. Some of them wrote that Iran must prepare itself for an attack, others attacked Israel and the Zionists.