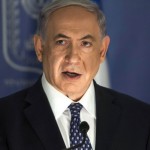 Israeli Prime Minister Bibi Netanyahu said today that he will hit Hamas with “great force” in response to the group’s rejection of Egypt’s proposed cease-fire.

“It would have been preferable to have solved this diplomatically, and this is what we tried to do when we accepted the Egyptian proposal for a ceasefire,” Netanyahu said in broadcast remarks. “But Hamas leaves us no choice but to expand and intensify the campaign against it.”

Although Israel accepted the cease-fire, Hamas responded by firing rockets, which killed a 38-year-old Israeli. Netanyahu also announced that he fired his deputy defense minister on Tuesday. Read more.