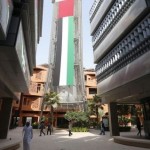 Israel is set to establish its first diplomatic presence in Abu Dhabi, the capital of the United Arab Emirates (UAE).

The Israeli office will not formally constitute diplomatic representation to the United Arab Emirates, but instead to the United Nations International Renewable Energy Agency (IRENA), which has its headquarters in the Gulf state.

Dore Gold, director-general of Israel’s Foreign Ministry, visited Abu Dhabi earlier this week to discuss the future activities of the office and to finalize the opening of the mission, including meeting with IRENA Director-General Adnan Amin, Haaretz reported.

The opening of the mission follows a several-year process by Israel to establish a presence in the UAE. In 2009, Israel supported the UAE’s bid to host the headquarters of IRENA with the understanding that it would eventually allow Israel to have a diplomatic presence in the Gulf State. But the 2010 assassination of a Hamas leader in Dubai, which the UAE blamed on Israel, set back the process. Israel will be the only country in the 145-member IRENA that will have its diplomatic mission in Abu Dhabi accredited solely to IRENA.