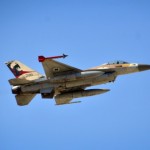 Israel carried out an air strike in the Gaza Strip Sunday night in response to a rocket attack earlier in the day, targeting a Hamas installation.

The military said it struck Hamas infrastructure in the south of the Strip. There were no immediate reports of Palestinian casualties.

The rocket had landed in an open field in southern Israel on Sunday night, causing no injuries or damage. Rocket sirens were triggered in the Sha’ar Hanegev Regional Council for the first time in two weeks.

There was no claim of responsibility for the attack, but Israel has often said it holds Hamas rulers responsible for any and all attacks from the coastal territory.

The Gaza border region has suffered sporadic rocket fire, much of it emanating from Salafist groups within the Palestinian enclave challenging Hamas rule.