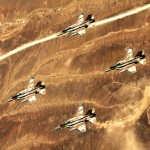 Israel’s Defense Ministry on Monday signed a contract worth hundreds of millions of dollars with the American aerospace manufacturer Pratt & Whitney.

Pratt & Whitney will be responsible for the maintenance of the entire fleet of Israeli Air Force F-151 and F-161 fighter jet engines. The 15-year deal “will ensure that the IAF will have at its possession, at any time, a quantity of working engines, set in advance, for operating fighter aircraft,” the Israeli Defense Ministry said.

The U.S. company has also committed to give first priority on maintenance work subcontracts to the Israeli defense industry.

“Pratt & Whitney is humbled and honored by the confidence Israeli leadership has placed in us and we look forward to working with local industries to provide continued, long-term support to the Israeli warfighter,” said Bennett Croswell, president of Pratt & Whitney Military Engines.

Though the contract was identified as being worth hundreds of millions of dollars, the exact amount was not disclosed.