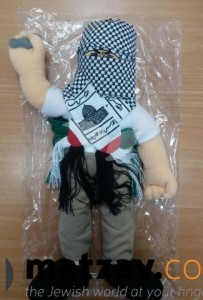 A recently confiscated shipment of about 4,000 dolls with mock rocks in their hands will be used to highlight Palestinian incitement against Israel, Deputy Foreign Minister Tzipi Hotovely announced Monday. The Palestinian Authority-bound dolls were seized at the Haifa Port following an inspection of several containers from the United Arab Emirates.

“The dolls were sent to the Palestinian Authority for one clear reason—brainwashing children,” Hotovely said. “I have instructed the Foreign Ministry to send the dolls to Israeli missions abroad to have them shown to PA donor countries and prove that we cannot hold any form of meaningful dialogue with our neighbors until their school system undergoes drastic change.”

The dolls’ faces are masked and the Dome of the Rock is prominently featured on their keffiyehs, bearing the inscriptions “Jerusalem is ours” and “Jerusalem, here we come.” Their colors mirrored those of the Palestinian flag.