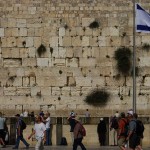 Israel saw a spike in tourism during October despite the ongoing wave of terrorism that has plague the country during the fall season.

According to the Israeli Central Bureau of Statistics, approximately 290,000 tourists visited Israel in October, compared to 224,000 tourists in September, a 29 percent increase.

At the same time, 5 percent more tourist came to Israel in October 2015 than during the same period in 2014.

Around 257,000 tourists visited Israel in October by airplane, with the reaming tourist entries through border crossings. About 25,000 tourists came through the Jordanian border, and 8,000 from Egypt.

The CBS cited the International Astronautical Congress convention in Jerusalem, which drew over 2,000 people from 60 countries, as one of the factors in the spike in tourism during October.

According to the Israeli Ministry of Foreign Affairs, since the beginning of October, there have been 77 terror attacks, including 62 stabbings, 7 shootings and 8 car rammings. Out of this terrorism, 12 people have been killed and 158 wounded.