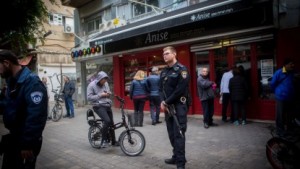 Israel has requested of the Palestinian Authority that it share any intelligence that could lead to the capture of the suspect in a fatal shooting attack in Tel Aviv on Friday, The Times of Israel reported today.

The appeal to the PA was made shortly after the fugitive suspect was identified as Nashat Milhem, and Israel has since been in contact with PA security officials, to whom it has conveyed the identity of the suspect and other details of the investigation.

Although officials suspect that Milhem, 29, of Arara, a village in northern Israel, may have fled to the West Bank, the search has mostly focused on Tel Aviv, specifically the north of the city.

The deadly attack took place outside the Simta bar on Tel Aviv’s busy Dizengoff Street on Friday. Shift manager Alon Bakal, 26, and patron Shimon Ruimi, 30, were killed in a hail of bullets as the gunman opened fire with a submachine gun, and seven people were wounded. Milhem went on to kill cab driver Amin Shaaban, a father of 11 from Lod, who was found shot to death in north Tel Aviv an hour after the attack.

Despite the ongoing search in Tel Aviv, Public Security Minister Gilad Erdan told Army Radio on Monday morning that there was “no reason to assume that the terrorist is in Gush Dan,” the Hebrew term for the Tel Aviv metropolitan area.

Erdan’s comments came as special police units painstakingly combed apartments in the city’s Ramat Aviv neighborhood belonging to customers who had received deliveries of vegetables from the local branch of a health food store where Milhem worked for several years. Police said they were considering the possibility that the suspected terrorist had commandeered an apartment and taken an elderly resident hostage, but that other avenues relating to Milhem’s escape route were also being probed. Authorities have warned he is armed, dangerous and capable of striking again.

A senior security source told Channel 2 Monday that the terrorist’s mobile phone, found by a citizen in the front yard of an apartment building on Ramat Aviv’s Reading Street on Friday, had not given the investigation any leads.

A second brother of Milhem was arrested Monday, three days after his brother Juadat was arrested Friday on suspicion of involvement in the crime.

According to Hebrew media reports based on police sources late Sunday, Milhem, who was jailed for five years for a 2007 attack on a soldier, fled the scene of the shooting on Dizengoff Street on foot and hailed Amin Shaaban’s cab on nearby Ibn Gabirol Street. The vehicle drove to north Tel Aviv, where Milhem worked. There, Milhem is alleged to have killed Shaaban outside the Mandarin Hotel.

He then drove the cab to Namir Road, where he abandoned it near a bus stop. Namir is a major north-south artery in north Tel Aviv, from which Milhem could have caught a public bus or other transportation out of the city.

The suspect’s father, Muhammad, a police volunteer, who recognized his son from video footage and called police, urged security forces on Saturday to detain the fugitive as soon as possible, fearing that he would strike again.

The father was questioned by police on Friday evening and again on Sunday, and computers and other items in the family home were seized by police as part of the investigation into the attack. One of the killer’s sisters was also questioned over the attack. The weapon used in the attack was reportedly stolen from his father’s safe at home.