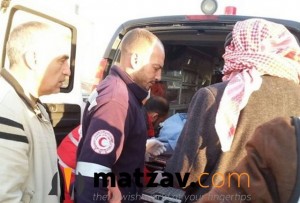 Israel on Tuesday released the bodies of three Palestinian terrorists who carried out terror attacks against Israelis.

Officials with the Palestinian Civil Affairs said that the bodies of terrorists Eiad Idies from Chevron, Baseem Salah from Nablus, and Mazin Hasan Ureiba from al-Eizariya had been delivered to them, Maan reports.

Idies was shot dead near Chevron on Dec. 24 after he stabbed an Israeli soldier with a screwdriver, while Salah was killed Nov. 30 after an attack left an Israeli police officer wounded near Yerushalayim’s Old City.

Araiyba was shot dead near Hizma on Dec. 3 after he opened fire on Israeli forces, injuring two soldiers.

The funeral of the 38-year-old terrorist Salah will be delayed as his body remained frozen and could not be buried.

Israel’s Public Security Ministry said in mid-October that the bodies of Palestinian terrorists would no longer be returned to their families and would instead by buried in “secret.”

A spokesperson for the ministry said at the time the decision was made in order to stem protests that frequently accompany the funerals of terrorists returned by Israel.