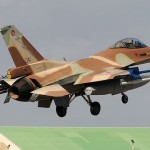 The Israeli Air Force reportedly carried out airstrikes in Syria on Wednesday evening.

According to reports, Israeli aircraft carried out strikes near the Damascus airport around 6 p.m. in the region, the Jerusalem Post reported. It was not yet clear if the airstrikes were aimed at a weapons shipment or other targets.

The Israeli military declined to comment on the reports. The most recent reported Israeli airstrike in Syria before Wednesday occurred in late October along the Lebanon-Syria border, targeting a weapons convoy for Hezbollah terrorist fighters.

The latest airstrike comes amid a Russian military buildup in Syria. In late September, Israeli Prime Minister Benjamin Netanyahu met with Russian President Vladimir Putin in order to discuss Russia’s involvement and to avoid any inadvertent clashes. The two sides set up a system of military-to-military communication to coordinate their Syrian efforts.

Israel has periodically launched airstrikes and artillery rounds into Syria, largely to prevent weapons transfers to Hezbollah or in retaliatory strikes to rocket fire on Israel in the Golan Heights region. But Israel’s foray into Syria has been limited due to concerns over becoming too heavily involved in the protracted conflict that has claimed hundreds of thousands of lives.