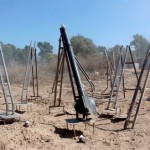 Israel intercepted a Gaza Strip-bound Palestinian truck with 450 liters of a banned chemical called TDI, known to be a central component in the production of rocket fuel, the Israeli Defense Ministry said Monday.

In the West Bank, Israel’s border crossing authority found the truck’s registered contents of so-called “soybean oil” to be suspicious and conducted a preliminary chemical test, which showed the liquid was actually unidentifiable.

After confiscating the materials and sending them to a lab for further testing, it was clear the material was TDI, a liquid prohibited from entering Gaza due to the Hamas terror group’s intent to use it for rockets. Israeli security authorities have opened an investigation into the incident.