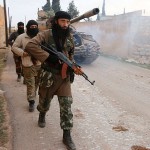 Prime Minister Bibi Netanyahu on Tuesday confirmed that Israel has had an active military presence in Syria.

“We operate in Syria from time to time in order to prevent a front there [from being] created against us and to prevent transfers of weapons, especially from Syria to Lebanon,” the latter country being home to the Hezbollah terrorist group, Netanyahu said at the 8th annual Galilee Conference in Acre.

Recent reports have attributed airstrikes in Syria to the Israeli Air Force, but the Israeli defense establishment has declined to comment on those strikes. According to the reports, Israeli fighter jets have attacked Hezbollah targets in Syria several times over the past year, including two separate operations over the last two weeks. Hezbollah, a proxy of Iran, has been fighting to preserve the regime of Syrian President Bashar al-Assad during the ongoing civil war in Syria. Israel has occasionally been struck by spillover fire from the Syrian conflict.