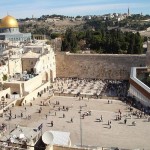 Israel is working to thwart an Arab-led UNESCO resolution that is seeking to declare the Kosel as a Muslim holy site.

The proposal, which is expected to voted on by Oct. 21, is “an attempt to redraw history and blur the connection between the Jewish people and its holiest place and to create a false reality,” the Israeli Foreign Ministry said.

The draft resolution was submitted to UNESCO’s Executive Council by six Arab states, including Algeria, Egypt, Kuwait, Morocco, Tunisia, and the United Arab Emirates, on behalf of the Palestinians. The resolution calls the Western Wall “Buraq Plaza.”

The proposal also calls for an international condemnation of the recent actions of Israeli forces in Yerushalayim, which is called the “occupied capital of Palestine” in the resolution.