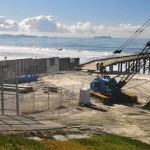 The heads of Israel’s defense system estimate that if Israel is targeted by missiles from neighboring countries during a theoretical war in 2012, 300 people will be killed in a three week period, according to a Channel 10 News report on Monday.

The report said that the ministers in the Israeli Security Cabinet were given this estimate during a briefing that was held on Sunday. Previous assessments talked about tens of thousands of casualties on the Israeli side.

According to the report, the briefing dealt with the most extreme scenario and referred to a war that may take place in 2012, before the Iron Dome anti-missile system is fully deployed. The ministers were reportedly informed that in three weeks of constant war, thousands of rockets would land in Israel, mostly from Lebanon and Syria and some from Gaza.

The ministers were told during the briefing that missiles from Iran may land in Israel as well, but that Iran’s ability in terms of conventional missiles is not great.

The most extreme estimate, according to the Channel 10 report, is that in these three weeks less than 300 Israelis will be killed. The number is high but lower than what was said in the past, the report noted. Until now, the estimates ranged between an existential threat to Israel and anywhere from 500 to 50,000 deaths.