Israeli Prime Minister Bibi Netanyahu today condemned the overnight attack on his country’s embassy in the Egyptian capital, saying the incident inflicted a “severe injury to the fabric of peace with Israel.”

The attack on the Nile-side embassy in Cairo forced all but one Israeli diplomat to leave the country and significantly added to the already growing tensions between the two Mideast neighbors, seven months after the ouster of Egyptian President Hosni Mubarak, Israel’s closest Arab ally.

Egyptian authorities placed the police on a state of alert after the overnight violence during which angry protesters broke into the Israeli Embassy, tearing down a cement barrier around the high-rise building and trapping the six staff members inside for several hours. The protesters dumped Hebrew language documents out of the embassy’s windows.

An aide to Netanyahu said on Saturday that the Israeli leader denounced the attack as a “serious incident” and a “blatant violation of international norms.”

Netanyahu thanked Egyptian authorities for helping rescue the six Israeli employees trapped inside the embassy, according to the aide, who said he heard Netanyahu’s remarks. The aide spoke on condition of anonymity because he wasn’t authorized to speak to the press.

“The fact that the Egyptian authorities acted with determination and rescued our people should be noted and we extend them our thanks,” the aide cited Netanyahu as saying. “However, Egypt must not ignore the severe injury to the fabric of peace with Israel and such a blatant violation of international norms.”

A senior Egyptian Health Ministry official said three people died during the street clashes between the protesters and the police outside the embassy, and more than 1,000 people were hurt. A total of 19 protesters were arrested.

The Israeli ambassador, Yitzchak Levanon, his family and nearly all the staff and their dependents — some 80 people — were evacuated out of the country by military aircraft overnight, according to another Israeli official. Only the deputy ambassador was still in Egypt, added the official, speaking on condition of anonymity because of the sensitivity of the subject.

The street battles between thousands of protesters and riot police and army troops outside the Israeli embassy in Cairo’s neighborhood of Giza lasted into Saturday’s early morning hours.

The police and army troops fired tear gas and live ammunition into the air to try and disperse the crowd. Several cars, police vehicles and trees on the streets outside the embassy were set ablaze. The violence subsided by around 6 a.m. 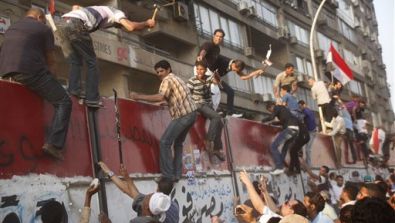 Earlier on Friday, hundreds of protesters had torn down the embassy’s security wall with sledgehammers and their bare hands.
After nightfall, about 30 protesters stormed into the embassy and just before midnight, reached a room on one of the embassy’s lower floors at the top of the building and began dumping Hebrew-language documents from the windows, said an Egyptian security official, speaking on condition of anonymity because he wasn’t authorized to talk to the media.

Since the February fall of Mubarak — who worked closely with the Israelis in his 29 years in power — ties have steadily worsened between the two countries.

At the time, Cairo protesters demanded the expulsion of the Israeli ambassador and calls grew in Egypt for ending the historic 1979 peace treaty with Israel, a pact never supported by ordinary Egyptians.

Several large protests have taken place outside the Israeli embassy in recent weeks but without serious incidents.

Friday’s attack came as Egyptians held their first significant demonstrations in a month against the country’s military rulers, with thousands gathering in Cairo and other cities. Alongside those gatherings, a crowd massed outside the Israeli Embassy building.

Tensions quickly escalated, and for the second time in less than a month, protesters were able to get to the top of the building and pull down the Israeli flag, which they replaced it with the Egyptian flag.

Mustafa Sayid said he was among the group of protesters who broke into the embassy. He showed a reporter cell phone video footage he said he recorded inside of young men ransacking the room.

The group got into the building through a third-floor window and climbed the stairs to the embassy. They worked for hours to break through three doors to enter the embassy, said the 28-year-old man. They encountered three Israelis and beat one of them.

It was not until several hours later that Egyptian police and military forces firing tear gas moved in to try to disperse the protesters from around the embassy. By that time, the crowds of youths had swelled to several thousand. Protesters were cleared from inside the building but held their ground outside, lobbing firebombs at the forces and setting fire to several police vehicles.

The military moved about 20 tanks and troop transport trucks into the area. State radio reported that one person died of a heart attack.

In Washington, President Barack Obama assured Israeli Prime Minister Netanyahu that the U.S. was acting “at all levels” to resolve the situation.

Israeli Defense Minster Ehud Barak said in a statement that he also spoke with his American counterpart, Leon Panetta, and appealed to him to do what he could to protect the embassy.

The demonstrations against Israel coincide with increasing discontent among Egyptians with the Supreme Council of the Armed Forces, which took control of the country when Mubarak was forced out on Feb. 11 after nearly three decades in power.

Several thousands massed Friday in Cairo’s Tahrir Square, as well as in the cities of Alexandria, Suez and elsewhere. Demonstrators in Cairo also converged on the state TV building, a central courthouse and the Interior Ministry, a hated symbol of abuses by police and security forces under Mubarak.

Seven months after the popular uprising that drove Mubarak from power, Egyptians are still pressing for a list of changes, including more transparent trials of former regime figures accused of corruption and a clear timetable for parliamentary elections.