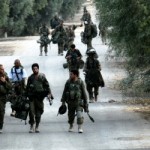 The agreement sets Israeli defense spending for 2015 at $16 billion. The appropriation will not entail any tax hikes, and the Finance Ministry’s budget proposal for 2015 will set the deficit ceiling at 3.4 percent.

“This deal represents an agreement about national priorities. The defense establishment will received the funds it needs to fight terror, the tunnels, and mortar fire, but we will also be able to significantly increase social budgets, and strengthen the middle class and the weaker [socioeconomic] echelons,” Lapid wrote on Facebook.