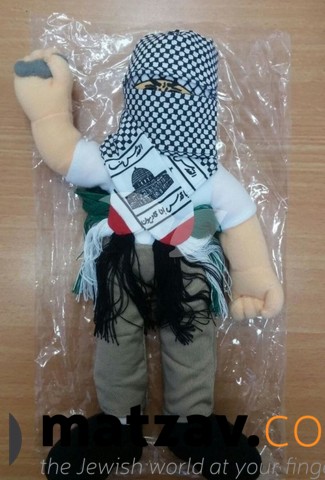 Israeli Customs office employees in the Haifa Port have prevented a smuggling attempt of an estimated 4,000 dolls of Palestinian stone throwers, which were apparently imported for the use of incitement against Israel.

The dolls bear the colors of the Palestinian flag and feature captions in Arabic such as “Jerusalem is ours” and “Jerusalem, we are coming.” Their faces are masked, and a stone is held in their hand.

The shipment of 4,000 dolls with anti-Israel clothing and messaging were intercepted by Haifa customs officials on their way to Palestinian Authority territory on Tuesday.

“The customs department continues its daily work in preventing smuggling into Israel with an emphasis on smuggling weapons and preventing the infiltration of inciting material—especially in this climate,” Haifa customs director Coby Yahav said.

The seized containers were imported to Israel from the United Arab Emirates and were labeled as clothing, rugs, and plastic products. In addition to the dolls, inspectors found light bulbs and military boots.