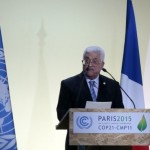 “Our resources are being usurped, our trees are being uprooted, our agriculture is being destroyed,” Abbas claimed, before urging world leaders to protect Palestinians from Israel.

The PA leader, however, also called for renewed peace talks with Israel.

“Our hand is still extended in peace to our neighbors,” he said. “In the meantime, we will continue to build our state based on modern and democratic principles.”

Abbas said his government had made “great progress” in adopting climate change laws, but complained that “continued Israeli occupation and violation of international laws related to the environment” was a central challenge in their implementation, Reuters reported.

Abbas had an unplanned face-to-face encounter with Prime Minister Benjamin Netanyahu earlier Monday, when the two found themselves standing side by side for a group photo of the more than 150 world leaders attending the climate summit.

After the pictures were taken, the two shook hands, for the first time since 2010.

The last round of US-brokered peace talks between Israel and the Palestinian Authority fell apart last year amid mutual recriminations.