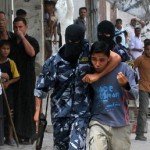 “When they [Israel] decided on this operation they have to expect that their soldiers may be killed, captured, or injured”, Senior Hamas official and spokesman Osama Hamdan told Al Jazeera.

However, Israel’s Ambassador to the United Nations Ron Prosor dismissed the reports. “There’s no kidnapped Israeli soldier and those rumors are untrue,” he told reporters at the UN.