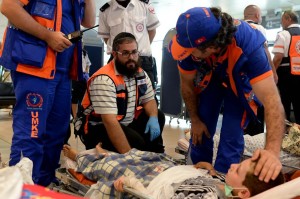 Israel continues to provide humanitarian assistance to Palestinians in the Gaza Strip no matter if Hamas is in a state of war or truce against the Jewish state.

About 270 trucks carrying 5,580 tons of goods and supplies have entered Gaza via the Kerem Shalom Crossing since August 11, according to a report released by the Israel Ministry of Defense’s Coordination of Government Activities in the Territories (COGAT) yesterday.

Among the trucks that entered the Gaza Strip, there were 133 trucks carrying 2,820 tons of food and 10 trucks carrying 100 tons of medicine and medical supplies. Since July 8, 3,324 trucks have entered Gaza from Israel. In addition, Magen David Adom (MDA) transferred 18 Palestinian patients at the Erez Crossing, which included sick and wounded individuals, from Gaza to Turkey via Ben Gurion Airport on Wednesday, August 13.

“Every month, Magen David Adom, transfers about 100 Palestinians patients from Gaza into Israel,” Zaki Heller, spokesperson for MDA told Tazpit News Agency. “Usually we transport the sick Palestinians to Israeli hospitals, often to Tel Aviv and Jerusalem. This time, the Palestinian patients opted for medical treatment in Turkey and so we brought them to Ben Gurion airport.”

At Ben Gurion Airport, the Palestinian patients received medical attention in a special terminal that was set up exclusively for them before they were flown on a Turkish aircraft to Ankara.

“We do this kind of humanitarian work with Palestinian patients year round,” added Heller.

Since Operation Protective Edge began on July 8th, 870 tons of medicine and medical supplies have entered Gaza through Israel amid the 3,510 rockets fired during that time according to the COGAT report.

In addition, COGAT has been working with international organizations and Palestinian authorities in order to repair critical infrastructure as quickly as possible in Gaza. Because water and sewage functionality is dependent on electricity, restoring electrical power in Gaza has been a major priority. As of August 12, eight of ten feeder lines were working and the final two are expected to be working by the end of the week.

Israel has imported 4.44 million liters of diesel for the Gaza power station and 1.24 million liters for UNRWA since July 8 via the Kerem Shalom border crossing. In addition, 3,021 tons of gas for domestic use and 5.5 M liters of fuel and 2.72M liters of benzene for transportation have been imported.

Earlier in the week, on Sunday August 10, several rockets were fired at the Kerem Shalom crossing, hitting work areas at the crossing and endangering the lives of crossing workers. Because of the Hamas rocket attacks, the IDF was forced to close the crossing in the afternoon hours, noting that trucks carrying flammable materials to Gaza were almost hit.

Throughout Operation Protective Edge, the Kerem Shalom crossing, which serves as the sole passage for vital humanitarian goods and equipment that are transferred to Gaza residents, was opened despite constant firing in the area.

Leave a Reply to not impressed Cancel reply