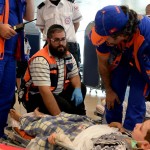 While Hamas intensifies its latest wave of rocket fire, Israel continues its humanitarian commitment to Gaza, agreeing to Turkish requests to transfer another group of Gazans wounded in recent fighting.

The level of daily rocket fire has swelled in recent days to levels unseen since Israel’s August 3 ground pullout, with a record 168 rockets launched on Wednesday. Thursday morning a mortar struck an Israeli children’s home in the Eshkol region near Gaza, seriously wounding a passerby. The 33-year-old sustained shrapnel injuries when he pushed a female caretaker out of harm’s way, which medics believe saved her life.

Meanwhile, despite Hamas’s two-day-long violation of a ceasefire consisting of some 200 rockets aimed at Israeli civilians, Israel continues to extend humanitarian aid to Gazans.

The Ministry reported that the patients were diagnosed in Gaza hospitals by Turkish physicians, who evaluated their medical condition and determined their ability to be flown.

In July Hamas leaders, frustrated with Egypt’s oversight in their Cairo negotiations with Israel, reached out to Turkey and Qatar to mediate the conflict. Hamas’s hope of cooperation and representation by Turkey, together with Turkey’s humanitarian involvement in Gaza, have helped fuel suspicions of collusion between the Turkish government and the terror group.