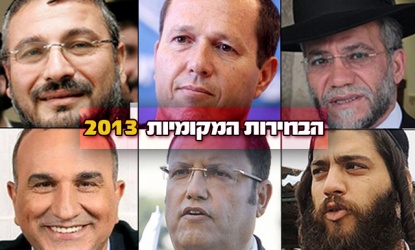 Polling stations in Israel’s municipal elections closed at 10 p.m. and workers began the process of counting the votes.

Yerushalayim is the epicenter of the election with the heated race between Nir Barkat and candidate Moshe Lion, who until recently lived in Givatayim and was bolstered by Yisrael Beiteinu chairman Avigdor Lieberman and Shas chairman Aryeh Deri.

Lion has been relying on mass support from the chareidi sector, but on Monday, Belz said it would not back Lion, and Deri’s attempt to meet with the Belzer Rebbe was rejected. Ger was also not officially backing Lion, and the Gerer Rebbe said his Chassidim were free to vote as they wish.

Barkat may be looking at another five-year term as Yerushalayim’s mayor, but the low voter turnout may work against him.

The overall turnout rate in Yerushalayim was 32%.

Leon, who had support from Shas, began his day visiting the kever of Rav Ovadia Yosef zt”l.

Turnout was high in Beit Shemesh, where Moshe Abutbul is facing a number of opponents.

Meanwhile, a mayoral candidate for an Arab party in Lod, Abed al-Karim Azbarga, was shot by a masked man near his campaign headquarters in the city last night, only hours before polls opened. He was taken to Assaf Harofeh Medical Center and is in moderate condition.