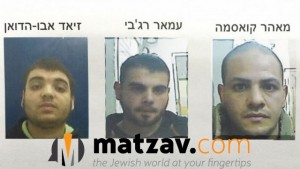 Members of the group, from Yerushalayim and Chevron, had planned to use the corpses of their victim or victims in order to negotiate the release of Palestinian prisoners from Israeli jails, similar to the motive behind the abduction and killing of three Israeli teenage boys in June 2014.

From the Shin Bet’s investigation of the Hamas operatives, the cell was in the “advanced planning stages” and had begun preparing the place where they would store the bodies of the kidnapped person or people.

“This case reconfirms that Hamas still aspires to carry out serious terror attacks, even now, in order to further egg on the recent wave of terror into a violent intifada,” the Shin Bet said in a statement.

Eyal Yifrach, 19, Naftali Fraenkel, 16, and Gil-ad Shaar, 16, were abducted last summer by a Hamas cell from a bus stop near the West Bank settlement of Alon Shvut, just south of Yerushalayim, and killed. Defense officials believed that the terror cell which carried out the killings had planned to use the abductees as a bargaining chip in negotiations with the Israeli government, but Israeli forces discovered the teenagers’ bodies before such negotiations took place.

The cell announced today included six people — three Israeli citizens living in Yerushalayim and three others from Chevron. They were led by Maher Qawasmeh, a 36-year-old from Chevron, who was previously imprisoned for two years for helping plan terror attacks for Hamas, the Shin Bet said.

Ziad Abu Hadwan, a 20-year-old resident of Jerusalem’s Old City, was another leader in the cell. Hadwan was released from prison in October, having been locked up for taking part in violent protests on the Har Habayis. Upon his release, he immediately joined the cell, the Shin Bet said.

Over the course of the past year, the group met multiple times in Chevron to plan various attacks against Israelis, investigators said.

The group first planned to carry out an attack with an improvised explosive device, but then moved on to plans for a shooting attack and sought out guns, before finally settling on a kidnapping and murder attack against an Israeli or Israelis, the Shin Bet said in a statement.

Once the group decided to carry out the kidnapping operation, they began searching for a cave or hole where they could hide the body of their victim and dug up a number of plots of dirt in the Chevron area to use, according to the Shin Bet.

With the body of an Israeli, the group believed it could negotiate the release of Palestinian prisoners in Israeli jails, the agency said.

The terror cell allegedly planned to use two cars to carry out the kidnapping, as they wouldn’t all fit in one vehicle. One of the cars — the one that would be used to transport the kidnapped Israeli or Israelis — would be driven by another Israeli member of the cell, 22-year-old Ammar Rajabe of Jerusalem’s Old City.

The thought behind the decision was that Rajabe’s superior Hebrew would assist in their getaway, the Shin Bet said the suspects revealed.

The case demonstrates the threat posed by Hamas terror cells in the West Bank seeking out the assistance of Jerusalem’s Arab residents, for both their knowledge of Hebrew and the free movement granted to them as citizens of Israel, the Shin Bet said.

When the Israeli members of the cell were picked up by Israeli security forces, the head of the cell, Qawasmeh, shifted gears and instructed the remaining members to try to get hold of the chemicals and fertilizer necessary to construct a bomb, the Shin Bet said. But the group was unsuccessful.