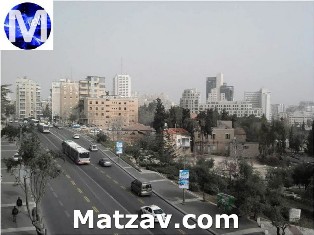 After experiencing a record breaking snow storm in December and an extremely dry winter after that, Israel is now experiencing more unusual weather – a sand and dust storm from the Sahara has descended on the country, creating a grimy and eerie atmosphere.

Such storms are not uncommon for this season, but the extent of the haze is outstanding, generating higher than usual temperatures, and limiting visibility on the roads to a minimum.

The haze is so dense that the Eilat Airport and Sde Dov Airport in Tel Aviv were shut down.

Emergency medical services report an increase in calls by civilians complaining of difficulties to breath. 74 protesters at the mass asifas tefillah on Sunday evening were treated for respiratory complications.

The Ministry of Environmental Protection issued a special warning regarding severe air pollution throughout the country. As a result of the sand and dust, there are particularly high levels of particulate matter in the air. These are small particles that can get into the respiratory system, causing breathing difficulties. Sensitive populations were urged to stay indoors as much as possible during the storm.

The sand and dust are expected to settle today.