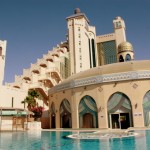 Israeli Interior Minister Silvan Shalom has approved a plan to bring Jordanian workers to Eilat hotels in order to fill a labor shortage in the resort city as well as to improve relations between Jordan and Israel.

“The workers agreement with Jordan is a suitable solution that all sides will benefit from: the hotels in Eilat and the workers themselves. Beyond the tourism aspect, this is a step that can benefit and contribute to ties between the two countries,” Shalom told the Israeli newspaper Ma’ariv.

As part of a three-stage plan, three sets of 500 Jordanian workers will be approved for employment by Eilat hotels and will be given daily work permits to commute across the border each day. The workers will be employed primarily in housekeeping.

Eilat Mayor Meir Itzhak Halevy praised the decision, but warned that the difficulty of attracting Israeli workers to Eilat should also be addressed.

“I would have been happy to employ Israeli workers, but over a long period of time we could not recruit Israeli workers, despite the wide basket of benefits the hotels and Israel’s government offered,” he said in a statement.