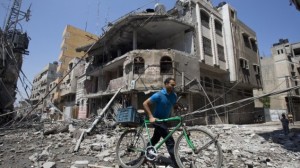 In what could prove a turning point in the war in Gaza, 15 civilians were killed and as many as 200 more were wounded this afternoon in the bombardment of a UN school – an assault that both sides claim might well be the fault of the other.

“We can confirm that [Palestinian] terror rockets that were fired from that area landed in the neighborhood of the UN facility,” said Cap. Eytan Buchman of the IDF Spokesperson’s Unit, asserting that the death and destruction may have been caused by errant rockets fired by Hamas or another militant organization.

UNRWA Spokesman Chris Gunness seemed to confirm that Hamas projectiles were fired in the area, writing on twitter that it’s “being reported there were Hamas rockets falling in Beit Hanoun today.”

But Israel’s Channel 2 news, quoting army sources, said nine mortar shells were fired by the IDF in the area of the UNRWA school in Beit Hanoun, and one errant shell “possibly hit the schoolyard.” It said the IDF had come under fire from Hamas in the area, and that a Hamas rocket might also have been to blame. The fire might have come “from both sides,” it’s military reporter Roni Daniel speculated.

A Hamas statement in a Ma’an news article called the attack on the school an “ugly crime” for which the Israelis “will pay.”

Robert Turner, the director for UNRWA, told Al Jazeera that the location of the facility “was conveyed to the Israelis,” and that the school was “monitored [to ensure] that our neutrality was maintained.”

Last week in Gaza, 20 rockets belonging to one of the terror groups were found in an UNRWA school, a development that the organization said in a statement was a “flagrant violation of the inviolability of its premises under international law.”

UN facilities on enemy territory have played a significant role in Israel’s asymmetric conflicts over the past two decades. The April 1996 Operation Grapes of Wrath, meant to quell Hezbollah rocket fire on northern Israel, was brought to a halt shortly after four artillery rounds hit a UN facility in the village of Kana, killing 102 people, including four UN personnel. The Israeli artillery strike came as a response to Hezbollah fire from nearby and in order to assist a force, under the command of now-Economy Minister Naftali Bennett, that had been ambushed in the field.

During the Second Lebanon War, on July 30, 2006, an Israel Air Force plane bombed a building hiding Hezbollah rocket launchers, resulting in the deaths of 28 people and hastening the onset of a ceasefire agreement.

Gaza Division commander Brig. Gen. Miki Edelstein said in a conference call with reporters that he was not yet familiar with the details of the incident, but that “we do not act against NGO facilities with no warning.”

“If,” he said, “if something happened, it is by mistake and not any other issue.”

A senior intelligence officer later confirmed that there had been Palestinian rocket fire from the area “very close to the school.” He added that “Israel could attack 10 times more Hamas activists” than it has thus far. But the reason it has held back, he said, striking “only one out of 10, is because they are hiding below, or very, very near, civilians.”