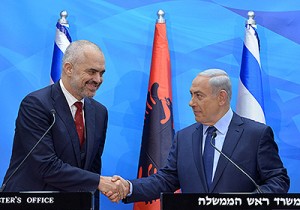 During their meeting, Rama expressed an interest in strengthening bilateral relations with Israel in the fields of security, cyber, water, energy and innovation. Netanyahu added that Israel plans to expand relations with Albania in a number of areas including trade.

“I think Albania is the only country whose Jewish population during the Holocaust actually grew because of the refuge and the sanctuary and the friendship and courage showed by the people of Albania. We never forget our friends, and we appreciate that display of humanity, civility and courage in our darkest hours,” Netanyahu said.