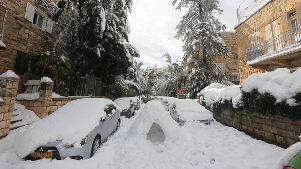 With more than 19,500 households still cut off from power in Israel due to the snowstorm, the political blame game has already begun. As politicians and governmental bodies – from the police to the Israel Electric Corporation (IEC) – exchanged verbal blows, Yerushalayim and numerous small communities were still cut off from the rest of the country, and it remains unclear how and when things will return to normal.

Among the sole pieces of good news which can be reported is that electricity has been restored in Givat Shaul and Kiryat Yovel neighborhoods in Yerushalayim, as well as in most of Tzefas’ neighborhoods.

During the storm, the MDA received over 10,000 calls for assistance, of them 8,829 from Yerushalayim alone, and 313 for child births.

So, who is to blame?

No authority can control the weather, but the State does have the responsibility to take steps in preparation of such an incident, as do main service providers.

The Israel Electric Corporation – which has been working to restore power to over 60,000 households who were disconnected (the current figure rests at 19,500 homes) – has been the target of most of the complaints. According to them, the police and Yerushalayim Municipality are to blame for failing to properly coordinate with one another and with the electricity supplier.

According to the IEC, once learning Friday that 60,000 houses were disconnected from power, dozens of their crews were ready to deal with the issue; but were blocked from entering because the municipality was late to activate snow plow crews, costing them precious hours.

They also claim that the municipality failed to cut down overgrown trees, tress which later fell and caused massive power shortages throughout the capital.

But the Yerushalayim Municipality refuses to accept the blame and according to them, the police, IDF and Electric Corporation are at fault.

“Even the director-general of the Electric Corporation, Yiftah Ron Tal, said that even if we would have trimmed the trees the problem wouldn’t have been solved,” a municipal source said, adding “the problem is with the infrastructure of certain areas. They haven’t been changed for years because of budgetary reasons.” Read a full report at Yediot Achronot.