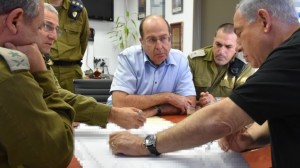 Israeli and Palestinian delegations were set to conduct more talks today, via Cairo, on a long-term truce.

Hamas confirmed the extension, but blamed Israeli “obstinacy” in the grueling negotiations and said that no progress has been made in talks

“The negotiations have faced difficulties because of the occupation’s obstinacy, and the 24-hour (extension) came as a result of a request by the mediators to have another chance,” senior Hamas official Izzat al-Rishq wrote on Twitter, later telling Al-Jazeera that there has been no progress on an agreement in the Egypt-mediated indirect talks.

“Both sides have agreed to a 24-hour ceasefire,” the official with the Palestinian delegation in Cairo said.

The negotiations center on an Egyptian proposal that meets some of the Palestinian demands, such as easing the blockade of Gaza, but defer other stumbling blocks to later negotiations. Israel and Egypt maintain the blockade to prevent Hamas, the Islamist terror group that seized control of Gaza in 2007, from importing more weaponry.

Hamas had repeatedly warned it would not extend the ceasefire, pressing for immediate gains that would allow it to claim concessions from Israel after the devastating four-week war in July and August.