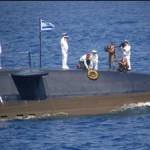 In a commemoration aboard Israel’s 4th and newest submarine, the INS Tanin (“crocodile,” or “alligator”), the IDF on Sunday held a wreath-laying ceremony at the site where 69 soldiers of INS Dakar went down with the ship, in the Mediterranean Sea some 270 miles off the Israeli coast in 1968, the Israeli army said.

“We will guard, protect, and act in any enemy coast, and fight bravely for the navy and the state of Israel,” Adm. Ram Rothberg, said at the event, The Jerusalem Post noted.

Referring to the prowess of the new Dolphin-class craft, IDF Chief of Staff Lt.-Gen. Benny Gantz said that, “Without a doubt, this power, operationally and strategically, is very important for Israel, the IDF and the navy.”

The INS Tanin is the most expensive weapon currently in IDF service, at a cost of over $513 million dollars, and is considered one of the most sophisticated submarines in the world.

“More than four decades passed since INS Dakar’s last voyage… Although the threats have changed, and today you have the most modern equipment, the most advanced technologies, and the most quality means, the mission remains the same mission that the INS Dakar personnel were sent on, and the responsibility is the same. To protect the Israeli coast, sea waters, and working with all of the IDF’s branches to achieve the relevant goals,” Gantz said.

In addition to the IDF’s top brass, three survivors of the Dakar were aboard: Abraham Szabo, Israel Rosen and Abraham Carmel.

The three, who were supposed to have boarded the submarine, at the last minute received orders to remain dockside and wait a few days before another ship was scheduled to arrive in Israel, according to Israel’s NRG News.

According to the Defense Industry Daily, the diesel-electric attack submarine will be outfitted with its Israeli systems after arrival at a specially-made, secretive dock in Haifa.

The craft can fire torpedoes and missiles, perform underwater surveillance, and launch combat swimmers out of wet and dry compartments.

According to Janes, the Dolphin-class subs are reportedly nuclear-armed, possibly with Israel’s Popeye Tubo cruise missile.

The official festive welcoming ceremony is set for Tuesday in Haifa.

Take an inside look at the most formidable, and expensive weapon, in Israel’s arsenal HERE.